I’ve had this site in mind for a whole year and since then it’s been rotting my mind. It was originally called Scribbled Wall but it wasn’t to be. It took a whole year until now because of this first post, and because of it I’ve had the under construction page up for Scribbled Wall since which disappoints me because I’d spent quite some time on it and it wasn’t the right way to appreciate it, but I’ll talk about that another time. For both this site and Scribbled Wall I had finished doing a decent layout but I just didn’t lay down a first post until now. I had content for later posts but it’s the first post. I feel the each post has to hold something significant and being the first it should target some points like an introduction. I’ve had this first post in mind for a very long time. I was thinking I should just write something quick like “Hello world, Rice Dog is up!” and just continue from there but I felt that was too rash and ugly and not what I wanted to project for this site. I also wanted to write a praise to Macromedia to say how wonderful Flash is and how it’s changed my life because this site will exhibit many of my Flash work. I had a lot to say in this first post but I didn’t and I wont because I’ll know I’ll just procrastinate. Another thing that held me back since I adopted the site Rice Dog was that I didn’t have a mascot in mind. There’s many aspects that I want this dog to have and although I can explain them, I’d rather just point out exactly what I want: 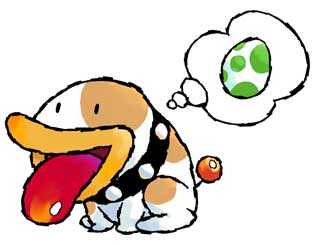 Poochie from one of the greatest games ever, Yoshi’s Island

Anyway I’ve run out of fuel and I’m getting kind of tired but at least the first post is done. So hopefully a long run of better posts will come and this site will hopefully become a little bit more livelier.